In August of 1981, when the undisputed king of Chicago blues headlined ChicagoFest —
then the Windy City's top outdoor music festival — for two nights, his loyal subjects mobbed Navy
Pier on the lakefront to hear one of the greatest innovators the idiom had ever produced.

Muddy Waters led the charge in the late 1940s and early '50s to electrify Delta blues in an
urban setting. His peerless combo would include such future stars as ace guitarist Jimmy Rogers,
harmonica virtuoso Little Walter and piano wizard Otis Spann. But Muddy was always at the center
of the action. His gruff, authoritative vocal delivery and slashing slide guitar define the purest form
of postwar Chicago blues. Waters' charisma was as immense as his musical vision.

Born April 4, 1915, in Issaquena County, Mississippi, McKinley Morganfield learned the
blues while sharecropping on Stovall Plantation. One guitarist particularly influenced him. "I never
seen a man could play at that time as good as Son House, to me. With that big voice he had, he could
sing," said Muddy. "He was preachin' the blues then, and I thought he was the best in the world."

In late August of 1941 musicologists Alan Lomax and John Work rolled into Coahoma
County in search of rural gospel and blues talent. They made field recordings of Muddy, with Lomax
returning the next year to cut more. But those were for the Library of Congress. It was only after
Muddy migrated north in 1943 that he pursued a career as a professional bluesman.

"As soon as I decided to leave, my mind said, 'Go to Chicago!'" he recounted. "So I
came." Pianist Sunnyland Slim introduced Muddy to Leonard Chess, then with the fledgling
Aristocrat label, in 1947. Waters cut a few small combo sides for the label before reverting to his
Delta slide attack the following year on "I Can't Be Satisfied" and "I Feel Like Going Home," his
first hit. "When I did them two sides, that's the sides they went nuts over," said Waters.

"I had a band in less than a week," Muddy remembered. "Mojo Buford — he was with
me before, the harp player — said, 'I'll get you some boys that'll cook just like that.' He called in
about two or three days. He said, 'I'm gonna bring 'em over and let you listen to 'em.' Just that fast,
I had a band!" Buford was joined by guitarists John Primer and Rick Kreher, pianist Lovie Lee,
bassist Earnest Johnson and drummer Ray Allison. They all instinctively understood Muddy's
groove.

After "Mannish Boy" gets the festivities off to a rousing start, Muddy counts off romping
shuffles for the ChicagoFest throng, rolling through Jimmy Reed's "You Don't Have To Go," Big
Joe Williams' "Baby Please Don't Go," Slim Harpo's "I'm A King Bee" and his own 1955 gem
"Trouble No More." For the luxuriantly downbeat "They Call Me Muddy Waters," he peels off a
slide solo that makes the hair on the nape of your neck stand up in silent salute.

In the midst of his rollicking "Walking Thru The Park," Muddy brings out fleet-fingered
guitar wizard Johnny Winter, producer of his 1977 "comeback" album Hard Again. "We met back
in the '60s in Austin, Texas," recalled Muddy. "He was one of the young white kids who was really
deep into it." Johnny sings "Going Down Slow" before Waters blasts out a swaggering "She's
Nineteen Years Old," boasting another jaw-dropping slide ride. Winter takes over again vocally for
a grinding "You've Got To Love Her With A Feeling" that morphs into "Five Long Years" when
local luminary Mighty Joe Young strolls up to the mic, Big Twist following that with a few special
lyrics for the occasion. Muddy brings it all to a close with a rousing "Got My Mojo Working."

"To stay with this music, you got to live with it. Sometimes you might be a little hungry,
but you got to stay with it. I've been where I couldn't get the right food a lot of times. My icebox
wasn't full, you know?" said Muddy, who passed away not long after this show on April 30, 1983.
"I'm glad it was like that. So when I got to the point that I could get what I want, I think I enjoyed it
better."

It's hard to tell who enjoyed those two evenings at ChicagoFest more — the crowd, his
pals onstage or Muddy himself. 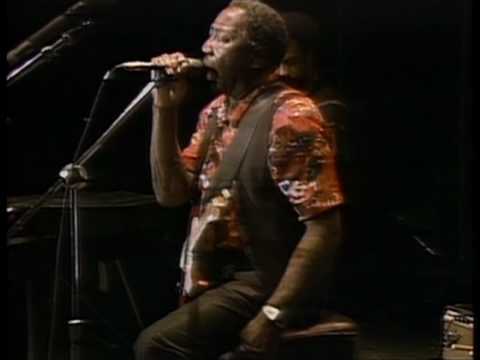