I am going to do this until you either wake up or I die a martyr. If you don't wake up then I would rather be killed as this world will not be worth living in...

This is Part 11 in a series of live broadcasts by William Cooper on the Hour of the Time shortwave radio program on Mystery Babylon.
The story of the Hashshashin, from whence the word "assassin" is derived, an Arab/Islam tentacle of Mystery Babylon.
Again the symbology, initiations, and esoteric secrets are similar to Freemasonry.
The Hashshashin, who utilized drugs, illusion, mind control, covert methods of spying, political assassinations, terrorism, and murder of their enemies, are the forerunners of modern covert "Black Ops" organizations such as the CIA, Mossad, MI-6, Al Qaeda, KGB, and Hezbollah.

This is Part 12 in a series of live broadcasts by William Cooper on the Hour of the Time shortwave radio program on Mystery Babylon.
The rise of the Knight Templars. It is a myth that the Templars were created to defend Jerusalem and pilgrim travelers, for they were created as an Order of the Mystery Religion. An Order cloaked with the appearance of Christianity. The Templars learned their ways from the Hashshashin, with whom they were in contact with in the mid-east. The Templars brought the Mystery Religion back to Europe with them, along with their riches and became the first international bankers. They were the original Communists and introduced Socialism to the nations of Europe and Lorded over the Kings and Princes of Europe.
They were the beginning of the modern era's march towards the New World Order.
William Cooper also briefly talks about Waco and Ruby Ridge.

This is Part 13 in a series of live broadcasts by William Cooper on the Hour of the Time shortwave radio program on Mystery Babylon.
The Oaths of the Templars. The Hospitaliters. Templars richer than the kings and nations they operated in. The Templars, frustrated in their attempt to take back the Holy Land from the Moslem hordes, plotted to turn on the Pope and the Kings of Europe and to overcome all of Christianity. The story of Jacques DeMolay, the persecution and execution of the Templars, and the fall of the Templars who are driven underground. The Baphomet and the adoration of man's intellect. The origins of Friday the 13th and the first October Surprise.

This is Part 14 in a series of live broadcasts by William Cooper on the Hour of the Time shortwave radio program on Mystery Babylon.
England and Scotland became the safe haven for the persecuted and fugitive Templars on the continent.
The elusive connection between the Order of The Knight Templars and the Order of Freemasonry is found in the genealogy of the families of the Elite. William Cooper discusses the book, "Born in Blood, the Lost Secrets of Freemasonry", by John J. Robinson.
The French Roots of Freemasonry.
The Freemason's symbology and ritual confirms the connection with the Templar persecution in France. The Freemasons, who were not, as popularly believed, a guild of medieval stone masons, but an underground secret society to designed to protect the fugitive Templars from the deadly persecution of the Pope and the King of France, were known also as the Sons of Light.
The origins of the legend of Hiram Abiff.
The connection to the Skull and Bones, the Pirates, the Rosicrucian Order, the French Revolution, the Order of the Quest, the Brotherhood of Death, the Bush family, families of America's elite, the US Intelligence agencies, and the American political parties.

This is Part 15 in a series of live broadcasts by William Cooper on the Hour of the Time shortwave radio program on Mystery Babylon.
The Roshaniya, or Illumined Ones of Afghanistan, were a re-emergence of the Cult of the Assassins. The Roshaniya's connection to the Jesuits and the Illuminati of Germany formed by Jesuit Priest, Adam Weishaupt.
The USA was designed as the vehicle of Mystery Babylon to forge the world into their "great work", a one word totalitarian socialist government, a government of the elite over the masses.
The coming King of the World. The Protocols of the Learned Elders of Zion.
Comparison of the Bavarian Illuminati to the Roshaniya.
Now, with the back ground on the Templars, the Assassins, and Roshaniya, we are starting to see the connection to the world events of today with the USA and Iraq, Iran, Afghanistan, but there is much more to come.
Mostrar más
videoclips 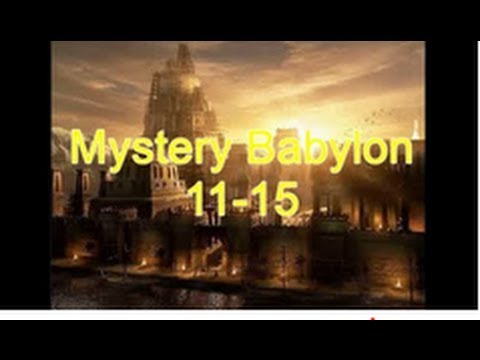